What is Bleb Needling? 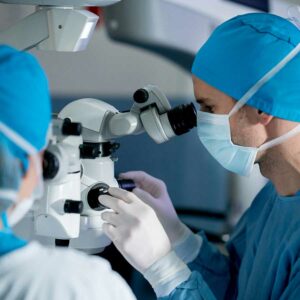 When conventional glaucoma surgery called a trabeculectomy (a type of microsurgery) is performed, in essence your doctor is making a new drain pipe so fluid from the inside of the eye can be directed to the outside of the eye, thus relieving pressure.

The tissue that forms a fluid reservoir over this surgically created hole is called a “bleb.” The hope is that the new drain pipe will remain open indefinitely but sometimes the body’s natural healing process creates scar tissue which can cover the drainage hole. When this occurs, “bleb needling” can often get the drain pipe and fluid reservoir to work as intended.

Bleb needling is generally considered a safe outpatient procedure performed in the doctor’s office. Most patients report only minimal discomfort. Factors such as the time period after the initial trabeculectomy and the degree of scarring will greatly affect the outcome. Some clinical investigators have found the procedure to be highly successful in re-opening the drain pipe, thus lowering the eye pressure for good long-term control.

It is also worth noting that this procedure can, and often needs to be performed more than once during the post-surgery healing. Since the risk is minimal, and the chance for recovering the function of the drain pipe is reasonably good, many eye doctors consider this an appropriate step in the management of glaucoma patients who have problems with scarring in the first few months following glaucoma surgery.