What Causes Glaucoma? Scientists May Have Finally Figured It Out 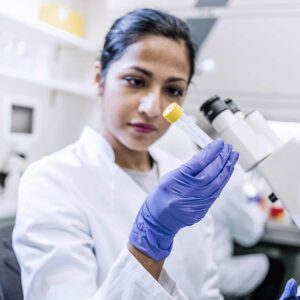 Previously, the irreversible eye disease was associated with elevated eye pressure and vision loss. The cause and effect factors were never clear, even for experts in the field.

The new findings suggest vision loss in people with glaucoma is caused by an immune response to early exposure to bacteria, which can elevate eye pressure and trigger heat shock proteins.

These proteins are designed to respond to stressors.

Memory T cells then detect the heat shock proteins and mistakenly see the neurons in the retina as foreign bodies and attack.

“The fact is, eye pressure is only a risk factor, which means only a small percentage of people who have elevated ocular, or eye pressure, actually develop glaucoma. Our study actually shows that the elevated eye pressure does not naturally lead to glaucoma,” Dr. Dong Feng Chen, co-senior author of the study, a vision scientist, and an associate professor of ophthalmology at Harvard Medical School, told Healthline.

The research opens opportunities for targeted treatment options and potentially even a cure.

“Targeted manipulation of the immune response in the eye,” Chen said, “will help eliminate the disease.”

A Way to Detect Glaucoma

Thomas Brunner, president and CEO of the Glaucoma Research Foundation, says this research is significant.

“Each new discovery moves us closer to a cure,” Brunner told Healthline. “Yes, these findings definitely add hope to our common goal to better understand glaucoma and identify ways to prevent and cure the disease.”

Chen explains that until now, glaucoma has been difficult to detect in its early stages.

“Officially, the early diagnosis is kind of difficult, as there are normally no symptoms at the early stage of glaucoma,” he said. “And people could lose 50 percent of the neurons before they realize they have actually lost vision.”

Early detection is a critical piece in preventing blindness, but before now, the options revolved around routine eye exams. By the time a person is tested, it could be too late.

The new findings suggest another strategy for early detection.

“This finding actually implicates that maybe now we have a biomarker that comes probably through the blood and predicts who’s going to have glaucoma and/or who is going to have a rapid progression of glaucoma,” Chen said.

The latest research is producing some optimism.

“This is an exciting time in glaucoma research, and we are very hopeful that a cure will be found in the next decade in addition to the ability to restore vision lost to glaucoma,” Brunner said.

The next steps at the Glaucoma Research Foundation include utilizing the new findings to help the more than 60 million people worldwide living with glaucoma.

In that effort, Brunner and his team are launching an initiative to restore vision loss.

“This major unmet medical need will benefit patients who have lost vision utilizing new discoveries, such as those of Dr. Chen and many others, in a wide variety of areas, including regenerative medicine, stem cells, gene therapy, and gene editing,” Brunner said.

Since the eye is an isolated organ, experts can target the misguided memory T cells, preventing them from attacking neurons and without harming the immune system.

Destroying select memory T cells could eliminate the risk factor for blindness. The potential is life-changing for millions.

“Humans don’t have to develop glaucoma if we control the immune response properly in the eye,” Chen said.

The collective understanding about what influences glaucoma has shifted.

Chen suggests future research includes “finding out whether the T cells can serve as the biomarker and predict glaucoma progression” and conducting human trials.

The full potential of this new insight isn’t confined to glaucoma.

Heat shock proteins are present in many other degenerative eye and brain diseases.