We are honored to introduce you to a prominent researcher whose work in glaucoma may one day lead to a cure: Dr. Richard Libby. 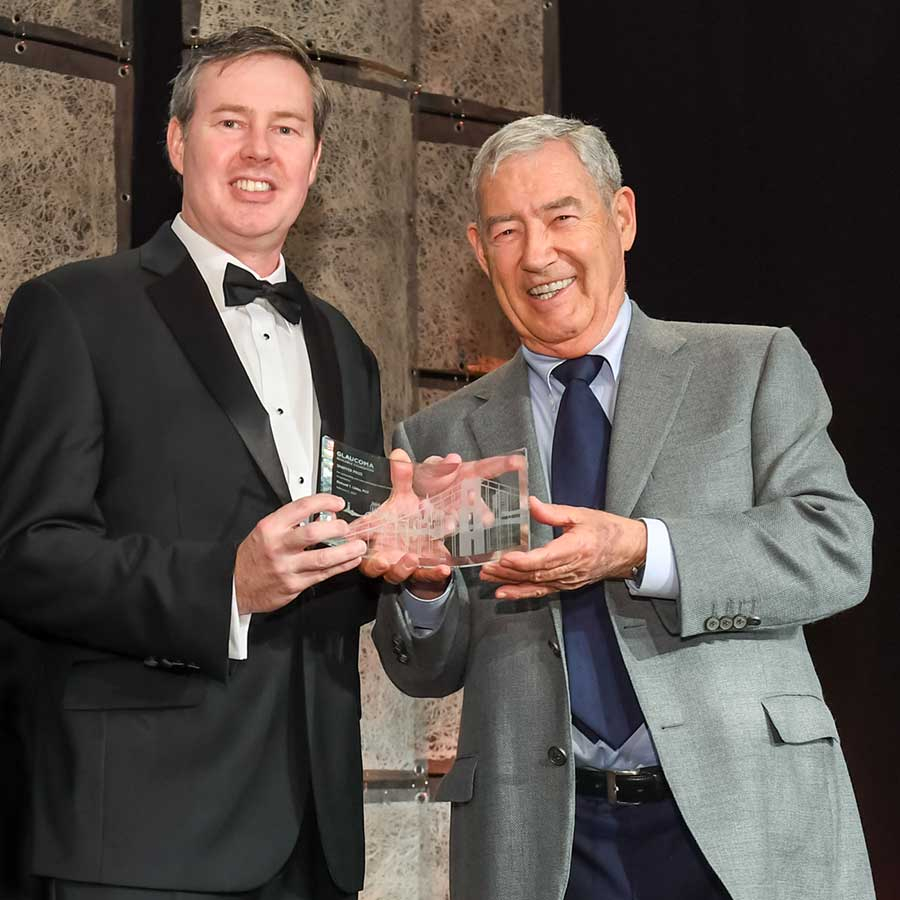 We are honored to introduce you to a prominent researcher whose work in glaucoma may one day lead to a cure: Dr. Richard Libby.

In February 2017, we honored Dr. Libby with the Shaffer Prize for Innovative Glaucoma Research at the Glaucoma 360 Annual Gala in San Francisco (Dr. Libby is pictured, left, with Dr. James Wise, right, the donor who funded the research project and helped to present the award).

Dr. Libby is a Professor at the University of Rochester Medical Center School of Medicine and Dentistry, and has received numerous awards and honors, including the prestigious Research to Prevent Blindness Career Development Award (2006-2010). Also, to support Dr. Libby’s commitment to training the next generation of scientists, he was awarded the University of Rochester School of Medicine & Dentistry Trainee Academic Mentoring Award in Basic Science. In February, he will be awarded the 2017 Shaffer Prize by Glaucoma Research Foundation in recognition of his research project that exemplifies the pursuit of innovative ideas in the quest to better understand glaucoma.

His project, “Understanding Axonal Degeneration Pathways in Glaucoma,” is an attempt to determine which molecular signaling pathways are responsible for the death of retinal ganglion cells in glaucoma. If he and his team can successfully pinpoint the cause of this degradation, it will be a major step toward preventing glaucoma-related vision loss.

We recently sat down with Dr. Libby to discuss his work, what inspires him, and why his unique perspective on glaucoma research is so important to the community.

Q: You were inspired to pursue glaucoma research during your postdoctoral work. How did you happen to pick this topic?

I received my PhD from Boston College studying retinal development, and I did a postdoctoral fellowship in England, studying Retinitis Pigmentosa (RP) and Usher Syndrome, both of which are degenerative diseases that lead to vision loss. While I was there, I took an NEI-sponsored course that offered an overview of the various issues affecting the eye, including glaucoma.

Considering my work with RP and my interest in age-related neurodegenerative eye disease, the idea of pursuing glaucoma research appealed to me. Later, I learned that Dr. Simon John at the Jackson laboratory in Bar Harbor, Maine was studying glaucoma, so in 2002 I started studying glaucoma in Dr. John’s laboratory as a postdoctoral fellow. By 2006, I was running my own lab at the University of Rochester, studying cell death pathways as they pertained to glaucoma.

Q: The summary of your study states that there are no present treatments aimed at neuroprotection for glaucoma patients. Why has there been so little progress in this area?

When I lecture students, I am often asked, “Why have we been studying glaucoma for thirty years and still don’t have a cure?” The answer is that every time we peel back a layer, we realize how much more complicated the disease really is. Neurodegeneration diseases such as ALS, MS, glaucoma, etc.are multi-factorial. We have to play catch-up even just to build models to study them.

Q: Your project aims to determine the molecular signaling pathways responsible for the death of certain cells. What about your project approaches this problem in a different or more promising way?

My application to GRF was concentrated on why retinal ganglion cells, the cells whose death causes vision loss in glaucoma, die. In the 1960s, 70s and 80s, seminal work was done in the glaucoma field. During this time, through careful observation of patients and innovative research using animal models, researchers were able to deduce that the lamina cribrosa was an important structure in glaucoma.

Making it more difficult, when I started studying glaucoma in Dr. John’s laboratory about fifteen years ago, we didn’t think of axon degeneration as a distinct molecular process. However, around the time I began to study glaucoma, several groups, including seminal work done by a GRF scientific advisor (Martin Raff), showed that axonal degeneration was an active process. That is, a molecular cascade controlled axonal death. Therefore, understanding this pathway could lead to molecular targets for drug design. My work picks up on these findings and focuses on identifying the molecules that control axonal degeneration in glaucoma.

Every research team needs seed money to get research from the ideas stage to the grant stage. Funding has allowed us to look at axon injury and degeneration. We are hoping to define the cell signaling pathway that leads from glaucomatous injury to retinal ganglion cell death—vision loss. After finding that signaling pathway, we would then be able to target molecules that can be pharmaceutically manipulated to delivery neuroprotective therapies. Targeting axonal degeneration pathways could stop vision loss in its tracks.

We want to take advantage of glaucoma’s huge prophylactic window, the time between when a \patient has a diagnosis of glaucoma and before they have significant vision loss. Of course, there are also people working to replace lost cells, but in twenty years and with adequate funding, that hopefully won’t be necessary.

Q: You are a recipient of the Glaucoma Research Foundation’s 2015 Frank Stein and Paul S. May Grant and you will be receiving the Shaffer Prize in February. How are you feeling about that? What are you hoping will be the outcome for your project as a result?

It is a real honor. These awards from GRF are extremely powerful, even transformative, because they fund new ideas and allow researchers like myself to take a chance, to look in a new direction. Without them, researchers would have a very hard time innovating, seeking new approaches to diagnostics and treatment. GRF, with its scientific advisors, and $50k research grants, has been at the forefront of the fight against glaucoma, offering really powerful tools for opening up new avenues of research.

Eye Drops May Delay or Prevent Glaucoma in African Americans

Catalyst for a Cure: A Clear Path to Vision Restoration