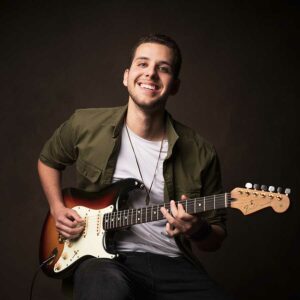 Igor Leal came to the United States from Brazil in 2015 to coach soccer and study music composition. He was 21. One day he walked in for a routine check of his contact lenses—he walked out with a glaucoma diagnosis.

“I left the hospital that day and the doctor came running after me. ‘You can’t just leave,’ the ophthalmologist said. ‘This is very serious.’” In fact, the doctor said he’d never seen eye pressure so high.

Igor’s family back home in Brazil was worried. So was Igor. None of them knew much about the disease. Igor was encouraged when he discovered Glaucoma Research Foundation. “I found so much information there,” he says, “and I was really impressed with their research. I began to follow them on Instagram and connected with their staff.”

Today, Igor’s pressure is stable thanks to drops, although he has lost some visual field. But he is incredibly grateful that he can drive and work…and most importantly, he can write and perform his music.

Igor is so eager to help, he has put on several benefit shows to raise awareness of the disease and raise funds for Glaucoma Research Foundation.

“My main goal is to let people know about glaucoma,” Igor says. “I feel Glaucoma Research Foundation has all the tools to find a cure and restore vision, they just need the funding.”

Igor has a soft voice and a warm smile. You can hear the hope in his voice when he talks about his future.

“Glaucoma doesn’t stop you from doing big things,” Igor says. And we believe him.

Listen to his first single, “Windows to Paradise,” a folk song he recorded in Nashville.

Igor is using his talents to support research at GRF. Make a gift for the future of talented young people like Igor, and the millions who are living daily with glaucoma.