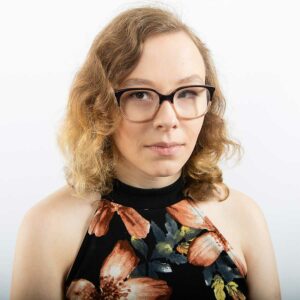 Hannah talks about her personal struggles with glaucoma and why she supports Glaucoma Research Foundation in our search for a cure. We interviewed Hannah at our first annual Glaucoma Patient Summit in San Francisco, March 2019.

Right now, I’m a senior at Lipscomb Academy and I’m attending Bellarmine University. Glaucoma has affected by life mainly because I’m involved as a vet tech, which is at a veterinary clinic, which is what I want to do. When I’m there, my passion is in surgery and my boss tries to show me simple surgeon’s knots to try and prep me for vet school. And I’m already seeing myself struggle. So glaucoma is mainly going to affect my future, I think, more than it is now. Because I already see the basic struggles I’m going to have, where other students are going to be ahead of me and I’m going to have to work much harder to do exactly what I need to do.

All my friends know, because of me, but if I were to say to a random 17-year-old on the street, no one would know what I was talking about. Or if they did, they would think “oh my grandma had that.” They wouldn’t actually know that it was such a leading cause of blindness in children, which I think is crazy — that something so powerful and far-reaching as glaucoma is known as an older person’s disease when in reality it affects so many more people. You would think it would be heard about more since blindness is such a bad thing and such an evident thing in our society, that we need to talk about it more.

How are you helping to raise awareness about glaucoma?

There are a few restaurants in town that do nights where, if people bring in a flyer, then 20 percent of what they buy goes toward the foundation of your choice, and usually they have information. One of my family friends owns a restaurant that’s a very, very popular restaurant. And so my plan is that soon we’re going to have one there. And there’s a popular pizza place where a lot of my friends go, and I’m probably going to do that there too.

Why is it important to find a cure for glaucoma?

I’ve been told that even if a cure is discovered it won’t help me, so it’s a little hard to think through it. But then I think through what my mom went through with me, because she didn’t want to have children at first because she knew it would get passed on to them. Even though I’m only 17, I start to think about when I have to make that decision, and if I’m going to want my children to go through the same thing as me. And so, I think a cure needs to be discovered so people can just live their life and not have to worry constantly about what’s going to happen to their children or what’s going to happen to their family, when it’s a genetic disease.