Glaucoma causes damage to the optic nerve, which can result in an eventual loss of vision. 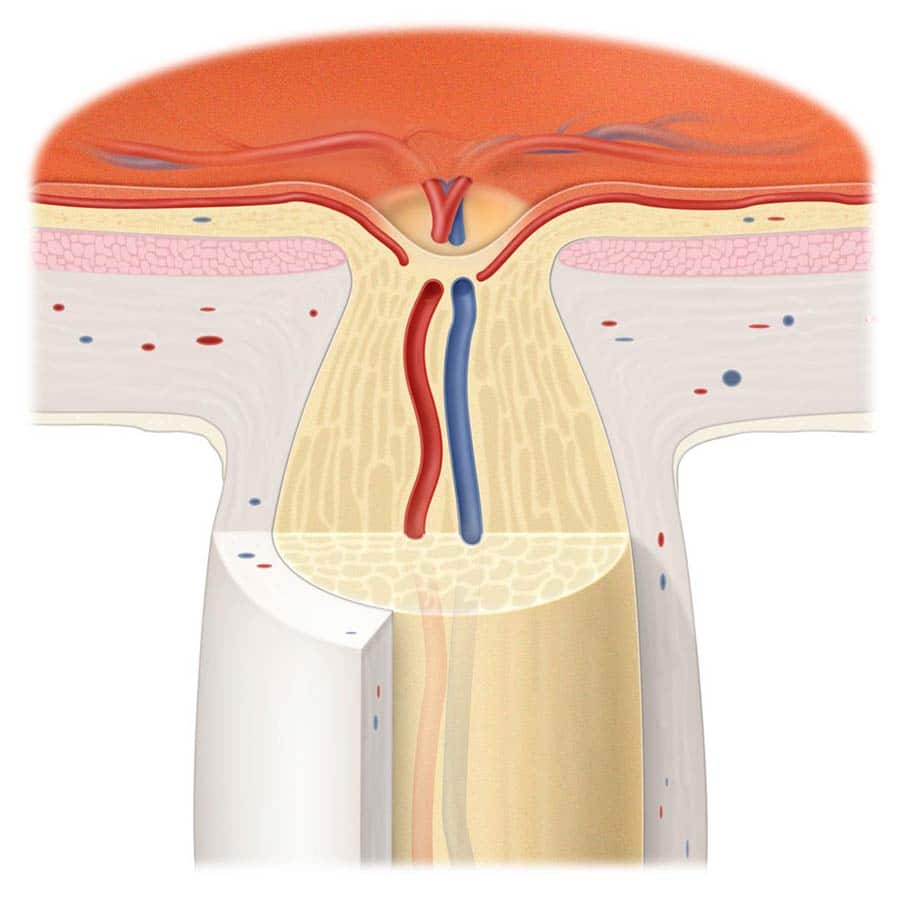 Glaucoma causes damage to the optic nerve, which can result in an eventual loss of vision.

How does the optic nerve work?

In glaucoma, researchers believe that the ganglion cells of the retina, as well as the support cells within the optic nerve, can die for various reasons. Some possible reasons include excessive fluid pressure within the eye, lack of blood flow or oxygen, or naturally occurring toxins within the eye. With sufficient damage, sight is lost.

Damage to the optic nerve is irreversible because the cable of nerve fibers doesn’t have the capacity to regenerate, or heal itself, when damage occurs. This is why glaucoma is an incurable disease at this point, and why early detection is so important.

Is there any way that damage to the optic nerve can be reversed?

At the present time, no. Research is still in the initial stages of investigating the mechanisms of regeneration and how they can be stimulated. However, there is a lot of exciting work going on in this area.

Optic nerve regeneration is possible in some lower vertebrates. For example, in animals such as fish and frogs, an injured optic nerve regenerates fully, allowing for a complete restoration of vision. In mammals, it has been shown that retinal ganglion cells, when put under conditions found in the peripheral nervous system, can successfully regenerate their axons.

Researchers are studying the visual systems of these animals to find out what factors stimulate retinal ganglion cells to regrow their axons and restore the transmission of visual information to the brain.

A key concern, then, is determining how and when retinal ganglion cell death is activated in glaucoma, and what steps can be taken to stop or prevent this from happening. A Catalyst Meeting sponsored by the Glaucoma Research Foundation discussed new hypotheses and research priorities that will lead to a better understanding of retinal ganglion cell death in glaucoma.

In 2008, Dr. Larry Benowitz and colleagues at Children’s Hospital Boston and Harvard Medical School made a discovery that could someday prove useful in reversing optic-nerve damage caused by glaucoma. Benowitz and colleagues discovered a naturally occurring growth factor called oncomodulin that stimulates regeneration of injured nerve fibers, known as axons, in the central nervous system.

Axons conduct impulses away from the body of the nerve cell, forming connections with other nerve cells or with muscles. Under normal conditions, most axons in the mature central nervous system — which consists of the brain, spinal cord and eye — cannot regrow after injury.

Dr. Benowitz believes oncomodulin could someday prove useful in reversing optic-nerve damage caused by glaucoma. “We’re in the midst of an exciting era of research in nerve regeneration,” Benowitz says. “There are a lot of promising leads in the area of blocking molecules that inhibit regeneration. But to get really strong regeneration, you also have to activate nerve cells’ intrinsic growth state.”

Axon growth nearly doubled when oncomodulin was added to retinal nerve cells in a Petri dish with known growth-promoting factors already present. No other growth factor was as potent. Benowitz and colleagues also discovered that oncomodulin switches on a variety of genes associated with axon growth.

This study builds on research funded in part by the Glaucoma Research Foundation from 1999-2001. In that study, Dr. Benowitz studied the optic nerve and found that an injury to the eye activated axon growth: it caused an inflammatory reaction that stimulated immune cells known as macrophages to move into the eye. Macrophages that enter the eye produce oncomodulin, which acts upon retinal nerve cells to stimulate axon regeneration.

Watch this video interview with Dr. Larry Benowitz from 2016:

I’m Larry Benowitz. I’m a professor of Ophthalmology and Neurosurgery at Harvard Medical School, and I’m the head of a research lab at Boston Children’s Hospital. My research primarily concerns rewiring of injured neural pathways, and in particular, we’ve been studying the regeneration of the optic nerve after injury.

The field of optic nerve regeneration has had massive advances over where we were, say 10, 15 years ago. I would say through the efforts of several laboratories, an area that was once thought to be intractable, that is, the ability of the optic nerve to regenerate itself, has just made tremendous strides. I should amend that statement somewhat to say that earlier work, going back quite a ways early in the 20th century and then continuing through the 1980s, 1990s, from the work of the Aguirre group, had shown that the cells of the retina, the projection neurons of the retina, the retinal ganglion cells, can in fact regeneration axons through the environment of a peripheral nerve graft that was affixed to the cut end of the optic nerve.

But, regeneration through the native environment of the optic nerve itself was long considered to be impossible. The reason for that, well, there were several reasons, but the primary one was thought that the cellular environment of the optic nerve was just considered to be very hostile to axon growth. Going back now almost 20 years ago, a scientist in Great Britain, Martin Berry, made a discovery that implanting a piece of tissue into the back of the eye, this tissue came from a peripheral nerve graft, a fragment of a peripheral nerve, was able to stimulate the nerve cells in the retina, the projection neurons, the retinal ganglion cells, enabled some of those neurons to extend axons into the native environment of the optic nerve itself. That was really a revolutionary discovery.

Our lab started working in this area shortly after that. We had previously been doing studies in the regeneration of the optic nerve in lower vertebrates, like fish, who can regenerate their optic nerves normally, under normal conditions. Then we switched. At about that time we had been studying mammalian retinal ganglion cells, and based on this paper from Martin Berry, we tested some molecules that we had been studying in our lab that we saw were able to stimulate outgrowth in cell culture, in retinal neurons in cell culture. We discovered at that point that simply causing an inflammatory reaction to take place in the eye, very strange, was enough to cause some of those neurons, some of the retinal ganglion cells, to regenerate damaged axons into the optic nerve. We found out that it was because of a molecule that was being produced by the inflammatory cells. We identified that molecule. Then there were a number of other discoveries from other groups that were, it turns out to be, complementary to these discoveries. For example, a scientist right where I am at Boston Children’s Hospital, Xi Gong He, discovered that if you knock out genes that normally repress growth of neurons, that will enable some growth to occur. Jeff Goldberg made a discovery that other factors, factors that normally suppress the transcription of certain genes, if you knock those out, you will get some regeneration.

Then we started discovering that these discoveries, that these findings from the different laboratories, were somewhat complementary to each other. If you put them together, there was a tremendous synergy and you were able to get some of the retinal ganglion cells to regenerate axons all the way from the eye back to the brain. In a paper we published in 2012, we found that some of those nerve cells were able to send projections back to the appropriate target areas in the brain. Those axons would make connections and we saw some evidence of a functional return, a little bit, kind of early, early glimmerings, or gleams, of a functional restoration. We were happy about that, but of course that was really just the beginning. What we realized is that the percentage of all the ganglion cells that were regenerating their axons was really a very small percentage of the total number.

At that point, we started to try to understand what was preventing all the other retinal ganglion cells from, number one, surviving injury to their axons, and number two, what was preventing them from regenerating their axons. At that point, I teamed up with another colleague at Boston Children’s Hospital, Harvard Medical School, Paul Rosenberg, a very knowledgeable, a very scholarly investigator, who had done work on, oddly enough, the role that zinc, the element zinc, plays in the nervous system. There have been a number of scientists who have been studying zinc biology, both because zinc is essential to the functioning of cells, but when things go awry, zinc can also be deadly, it can be highly toxic to nerve cells.

There were important discoveries in the 1990s and subsequently showing that after a condition such as ischemic stroke, zinc was playing a major role in the death of cells. There is a lot of research implicating zinc in Alzheimer’s disease and other neuropathological conditions. So we started to look at the role that zinc might be playing in the retina after the nerve fibers, after the optic nerve is damaged. We discovered then, something really surprising, and that is that levels of zinc, free zinc, ionic zinc, went up sky high in the retina, when the optic nerve was injured. We’ve been studying now the molecular mechanisms that give rise to that increase. But, the surprising thing is, that if you bind up that zinc with compounds called chelators that will bind that zinc with high affinity and high specificity, we can actually slowly improve the ability of retinal ganglion cells to survive and the ability of those cells to regenerate their axons. This is a kind of a previously unrecognized factor that’s playing a major role in determining whether the retinal ganglion cells are able to survive injury and whether they are able to regenerate their axons.

Larry Benowitz, PhD is Director of the Laboratories for Neuroscience Research in Neurosurgery and Professor of Neurobiology and Neurosurgery at Harvard Medical School, Children’s Hospital Department of Neurosurgery, Boston, MA.