With 33 companies presenting innovations and 380 attendees, New Horizons Forum provided a boost of energy and commitment to the future of glaucoma diagnosis and treatment. 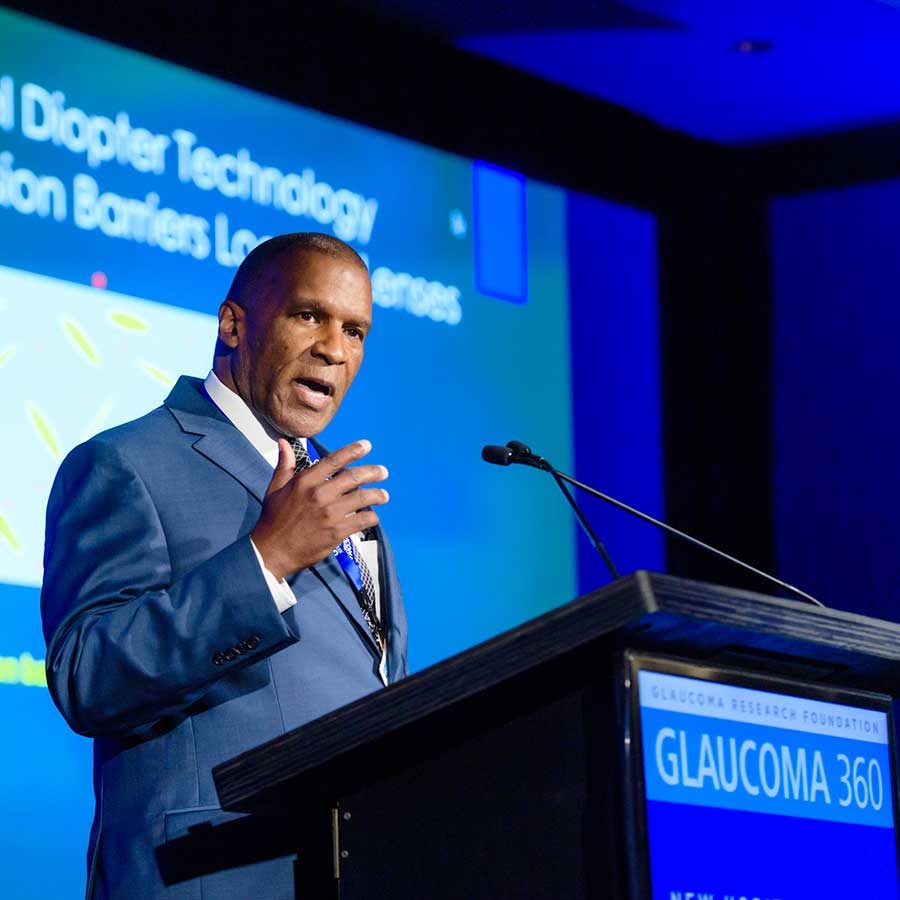 With 33 companies presenting innovations and 380 attendees, New Horizons Forum provided a boost of energy and commitment to the future of glaucoma diagnosis and treatment.

The core topic was glaucoma, but because the information and attendees came from all of ophthalmology, the day began with a forthright assessment of the current state of research and development by keynote speaker David Parke II, MD, CEO of the American Academy of Ophthalmology.

Dr. Parke’s lecture on health policy and health economics, “When Cost and Innovation Collide in Ophthalmology,” made the presentations that followed even more impactful. Noting that “innovation technologies are the single greatest factor for the rising cost of health care today,” Dr. Parke confirmed the Academy’s commitment to moving innovation forward while managing health care costs through its collaboration with state and federal government, insurance carriers, and Academy members.

With 33 companies presenting innovations and 380 attendees asking questions, networking, and exchanging ideas, New Horizons Forum provided a boost of energy and commitment to the future of glaucoma diagnosis and treatment.

Watch out OCT, visual fields, and fundus imaging – a new test may be on the way. OcuSciences, Inc. has developed a rapid, noninvasive way to measure flavoprotein fluorescence, which is an indicator of metabolic stress and therefore mitochondrial dysfunction. When the mitochondria of retinal cells are not working properly, the cell will die. Measuring their activity allows for detection of potential cell death – early change before damage actually occurs. The developers think this will be especially helpful in people with ocular hypertension.

Belkin Laser reported on its progress in the past year with its device that theoretically would do the equivalent of an SLT (Selective Laser Trabeculoplasty) treatment in one second via a non-contact laser system. Belkin’s device is timed well with the Lancet publication of the LiGHT study in 2019 that concluded SLT may be the preferred first-line treatment for early glaucoma. Data from Belkin Laser shows similar outcomes as the current SLT procedure. Given that more testing of the device and a close look at outcomes is still needed, this device holds promise to significantly impact the course of treatment.

Eyetronic Therapy, a Germany-based company, has developed electrode imbedded goggles that, when worn, electrically stimulate optic nerve cells so that metabolism in those cells increases to the point that nerve cell function is restored. The developer reports that their device has been used on nearly 500 German glaucoma patients with promising results. They reported that in 72 eyes, after 12 months, 64% of eyes treated experienced no disease progression and 39% experienced no disease progression as well as partial visual field restoration. They hope to embark on a multicenter study in Europe and the United States soon. Although early results are encouraging, further studies are needed.

Turning to IOP measurement, Smartlens Inc. has developed a new soft contact lens that would monitor IOP continuously for 24 hours at a time. In initial studies, this innovative tool has been found to be comparable to the hand-held Tonopen tonometer. Data from the contact lens gets sent to one’s smartphone for analysis and then to the doctor. Users would be required to subscribe to different data packages, depending on what their provider thinks is needed. Developers think the Smartlens might be especially promising for those who have or are suspected to have unstable eye pressures.

In the entertaining Show Me the Money segment of the Forum, entrepreneurs pitched their ideas to venture capitalists and company executives, and audience members voted on which start-up they would fund. The 2019 “Perfect Pitch” winner, Vivid Vision, returned with their VVP-10, a low-cost home perimetry unit that utilizes video game design to detect visual field progression. They reported continued progress, with over 350 providers currently using the device. We look forward to hearing their progress next year.

Qlaris Bio won the 2020 “Perfect Pitch” competition, with its potassium channel blocker that lowers the pressure in the veins of the eye, known as episcleral venous pressure (EVP), with no significant side effects. Developers see this as a possible primary treatment for glaucomas of increased EVP, such as Sturge-Weber syndrome, and possibly as an additive agent to minimally invasive glaucoma surgery (MIGS).

For a variety of reasons, patient compliance remains the biggest problem in glaucoma medication delivery. 3T Ophthalmics thinks they can help, with their implant that is inserted under the conjunctiva to provide medication as long as 2 years. The implant is not visible, and is said to be not irritating. The company notes the implant can carry multiple drugs (not only glaucoma drugs), and several devices can be implanted if needed. This makes the implant highly customizable to the individual patient’s needs. 3T Ophthalmics thinks their innovation will be of particular interest to the international market, especially in developing countries.

Other drug innovations included a novel “small molecule” eye drop and a protein agonist that is injected every 1-2 weeks (Mannin Research); a rho kinase inhibitor, which reduces inflammation of the optic nerve, encased in an injectable implant that lasts 6 months (Aerie Pharmaceuticals); a peptide-lipid molecule called LipTide that can carry drugs to the back of the eye to act directly on the optic nerve after being injected at the front of the eye under the conjunctiva (NanoGenics).

One way to reduce some of the initial cost of creating a new technology is by using an existing technology in a new way. Diopter Corp. presented encouraging news of no adverse effects from their new drug delivery system that uses existing contact lenses. In trials on dogs, the contact lenses were imbedded with 3 different drugs and left on the eye to diffuse the medication overnight. In the morning, the lenses were removed. Diopter reports that the drugs’ IOP-lowering effects last longer than conventional eye drops, so the medication needs to be administered less often.

No program on innovation would be complete without including neuroprotection and regeneration. One of the most exciting treatments on the horizon is Neurotech Pharmaceuticals’ ReNexus NT-501 Implant, genetically modified ciliary neurotrophic factor (CNTF) encapsulated cell therapy.

Jeffrey Goldberg, MD, PhD, Professor of Ophthalmology at Stanford University and GRF Scientific Advisor, explained that when the CNTF is surgically implanted under the sclera, it increases the retinal nerve fiber layer thickness. Findings at 2 years suggest that the implant helps; the next phase of studies will address questions such as whether doubling the dose would help twice as much.

Also showing promise in the mouse model, ReNetX Bio developed a biologic protein imbedded in a microbead that targets the “arms” of nerve cells, called dendrites, thereby preventing nerve cell damage of the retina. They see this helping glaucoma patients one day as a supplemental treatment to IOP reduction therapy.

Speakers and audience participants alike were excited at prospects for marrying diagnostic and monitoring innovations toward better treatment. They also were encouraged by the range of tools patients may someday be able to use at home to compliment surgery and other treatments in a more holistic approach to management.

Another development to watch is the increasing ability to integrate and analyze data with the help of artificial intelligence, as well as increase the speed of analyzing data to make trends available to clinicians faster. This may one day simplify assessment and decision making so doctors can tell more precisely who is at increased risk and when to intervene. Lastly, research that looks at cell health and cell restoration brings new perspective to a field that has mainly focused on measuring cell death.

When asked what they were most excited about right now, industry panelists cited new surgical and pharmaceutical products for the US, fluorescent imaging, neuroregeneration, the use of artificial intelligence, the broad base of products that touch on all aspects of glaucoma care, and care that is holistic in its approach.