Eye Drops May Delay or Prevent Glaucoma in African Americans 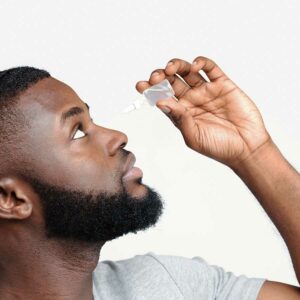 Eye drops that reduce elevated pressure inside the eye can delay or possibly prevent the onset of glaucoma in African Americans at higher risk for developing the disease, researchers have found.

This makes it more important to identify African Americans at higher risk for developing glaucoma so they can receive prompt evaluation for possible medical treatment.

Primary open-angle glaucoma is the most common form of glaucoma and one of the nation’s leading causes of vision loss. Of the African-American study participants who received the eye drops, 8.4 percent developed glaucoma. By comparison, 16.1 percent of the African-American study participants who did not receive the eye drops developed glaucoma.

The study was funded by the National Eye Institute (NEI) and the National Center on Minority Health and Health Disparities (NCMHD), two components of the Federal government’s National Institutes of Health.

The results of this study, called the Ocular Hypertension Treatment Study (OHTS), are a followup to initial results released two years ago. In those findings, researchers discovered that treating people with elevated eye pressure could delay or prevent the onset of glaucoma. At that time, results for the subgroup of African Americans trended in the same direction, but were not conclusive.

“This is the first study to recruit large numbers of African Americans to examine the benefit of pressure-lowering eye drops to prevent or delay the onset of glaucoma,” said Paul A. Sieving, MD, PhD, director of the NEI. “The results underscore that African Americans over age 40 should receive a comprehensive dilated eye exam at least once every two years to see if they are at higher risk for glaucoma.”

These results do not imply that every African American with high eye pressure requires treatment, according to Eve Higginbotham, MD, chair of the Department of Ophthalmology at the University of Maryland Medical Center and first author of the journal article. “When determining treatment, doctors should take into account several risk factors, including specific anatomical characteristics of the optic nerve and the cornea,” Dr. Higginbotham said. “While African Americans participating in the study were more likely than others to have these specific physical characteristics, the study results underscore the importance of measuring these ocular risk factors rather than relying solely on the race or ethnicity of the individual.”

Dr. Higginbotham suggested that before determining treatment, the doctor and patient should also discuss the patient’s health status and life expectancy, and the burden of daily treatment, including cost, inconvenience, and possible side effects.

The OHTS studied more than 1600 people, including 408 African Americans, 40-80 years of age who had elevated eye pressure but no signs of glaucoma. Half were assigned daily pressure-lowering eye drops, and the other half were assigned to observation (no medication). In the medication group, the number of African-American participants developing glaucoma was significantly lower (8.4 percent) compared to the observation group (16.1 percent).

“The study also confirms that the risk for developing glaucoma is higher among African-Americans compared with others,” said Michael Kass, MD, of the Washington University Department of Ophthalmology and Visual Sciences and chair of the study. “A number of risk factors may be contributing to the increased prevalence of visual impairment from glaucoma in African Americans. These include a family history of glaucoma; earlier onset of the disease compared to other races; later detection of the disease; and economic and social barriers to treatment.”

A Leading Cause of Blindness

This article discusses follow-up results from the Ocular Hypertension Treatment Study (OHTS). These results were reported in the June 2004 issue of Archives of Ophthalmology.

The term ocular hypertension typically refers to any situation in which the pressure inside of the eye is higher than normal.

Ocular hypertension is not considered a disease by itself, but it can lead to a condition known as glaucoma.

Glaucoma is a serious disease that causes vision loss and can also lead to blindness if left untreated. On its own, ocular hypertension does not cause damage to vision. This condition must be monitored carefully and, in some cases, treated with topical eye medications.