Endoscopic laser surgery is used to treat both open-angle and angle-closure glaucoma. 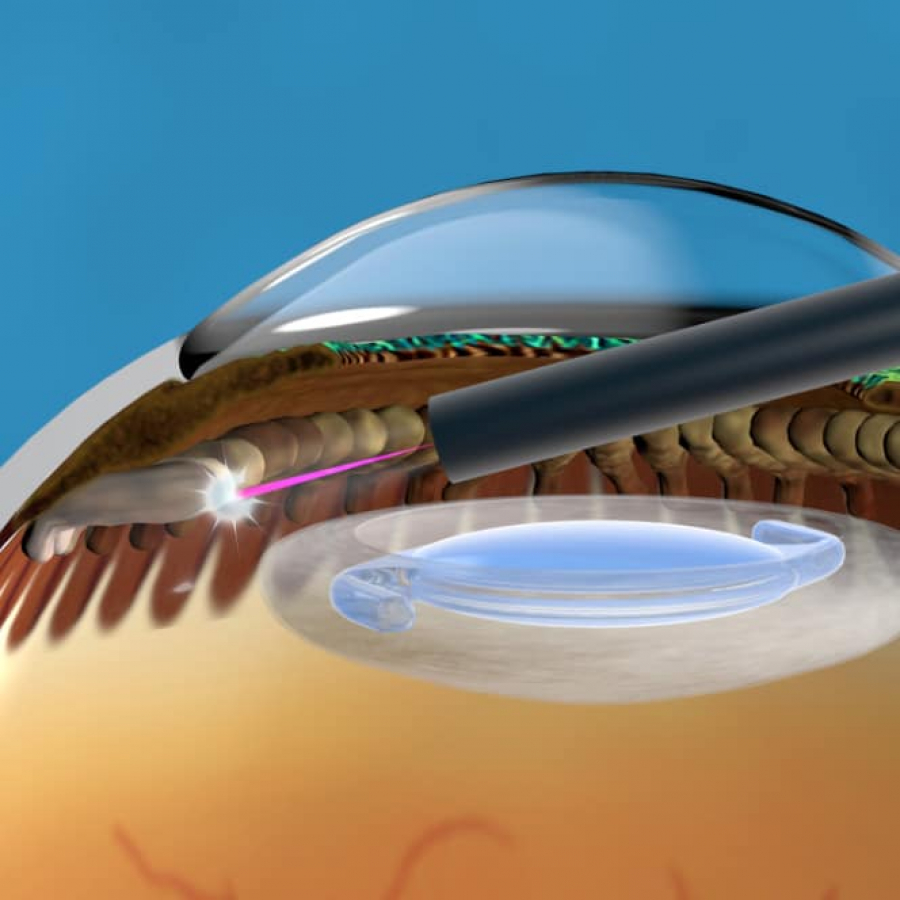 Endoscopic laser surgery is used to treat both open-angle and angle-closure glaucoma.

Cyclophotocoagulation (or CPC) refers to glaucoma laser surgeries that target the glands in the eye that produce fluid (aqueous). The goal is to reduce the formation of aqueous and thus lower intraocular pressure. The analogy is turning down the faucet in a sink to decrease the amount of water flowing in (figure 1). CPC can be divided into endoscopic (those done with a probe inside the eye), or transscleral, (those done with a probe from the outside of the eye).

The earliest type of CPC was performed by the transscleral approach with the Diode and Nd:YAG Laser. Due to higher risks of pain, inflammation, decreased vision and overtreatment leading to hypotony (eye pressure that is too low), these techniques were usually limited to persons with severe glaucoma damage that was not successfully managed by standard glaucoma surgery, or for types difficult to treat such as neovascular glaucoma.

The technique evolved to lower the amount of energy delivery and space it out over longer exposure times to reduce these complications. Endoscopic CPC was developed to deliver the laser energy in a more targeted and controlled fashion by using a probe inside the eye with a camera and laser so that the tissue can be viewed during treatment. More recently, a technique known as Micropulse CPC or Micropulse transscleral laser therapy was developed that delivers the laser energy from an external approach in short pulses with pauses in between to lower energy delivery and decrease complications.

Working from the Inside

The tool used for this surgery, a laser endoscope, fits through a small 2 mm incision, and consists of small optical fibers that are used as lenses and cameras (figure 2). The surgeon controls the progress of surgery by viewing a video monitor, rather than looking through an operating microscope. The laser is applied directly to the eye tissue that needs to be treated (figure 3).

Endoscopic laser treatment has possible advantages over other similar types of surgery. With other types of cyclophotocoagulation surgery, doctors apply the laser from the outside. In endoscopic laser surgery, doctors can directly target the tissue they need to treat from the inside and have a better gauge of when enough laser energy has been used.

Types of Glaucoma Treated with ECP

Endoscopic laser surgery is used to treat both open angle and angle closure glaucomas (describing whether the trabecular meshwork drain is open or blocked). It can be used to treat mild to moderate glaucoma, usually at the same time as cataract surgery, and can be combined with other glaucoma surgeries at the same time to lower pressure more. It is also appropriate for use in more moderate to advanced glaucoma after other glaucoma surgeries have failed such as Minimally Invasive Glaucoma Surgery (MIGS), trabeculectomy, or glaucoma tube shunt. It can also be used in the treatment of childhood glaucoma, but may not be as effective in children as it is in adults. The effects may wear off over time, and the surgery can be repeated or augmented if that occurs.

Risks and side effects

Inflammation and temporary decreased vision and postoperative pain are common side effects of CPC surgeries. The intensity of these side effects has been reported to be less with endoscopic laser treatment versus the traditional transscleral CPC. As with other cyclodestructive surgeries, because part of the ciliary body may be destroyed, there is a small risk of the eye pressure dropping too low to maintain the eye’s normal metabolism and shape.

In summary, ECP represents a unique type of laser glaucoma surgery used to treat a wide variety of patient scenarios, and is one of the more commonly used glaucoma surgeries to reduce fluid production in the eye. It is FDA approved and therefore available as standard of care treatment either as a stand-alone procedure, or combined with cataract extraction or other glaucoma procedures.

Brian A. Francis, MD, MS is the Steiger Endowed Professor of Ophthalmology at the Doheny and Stein Eye Institutes, David Geffen School of Medicine, University of California, Los Angeles.

Canaloplasty: A Surgical Alternative for Glaucoma

Generic Medications: Are They the Same?