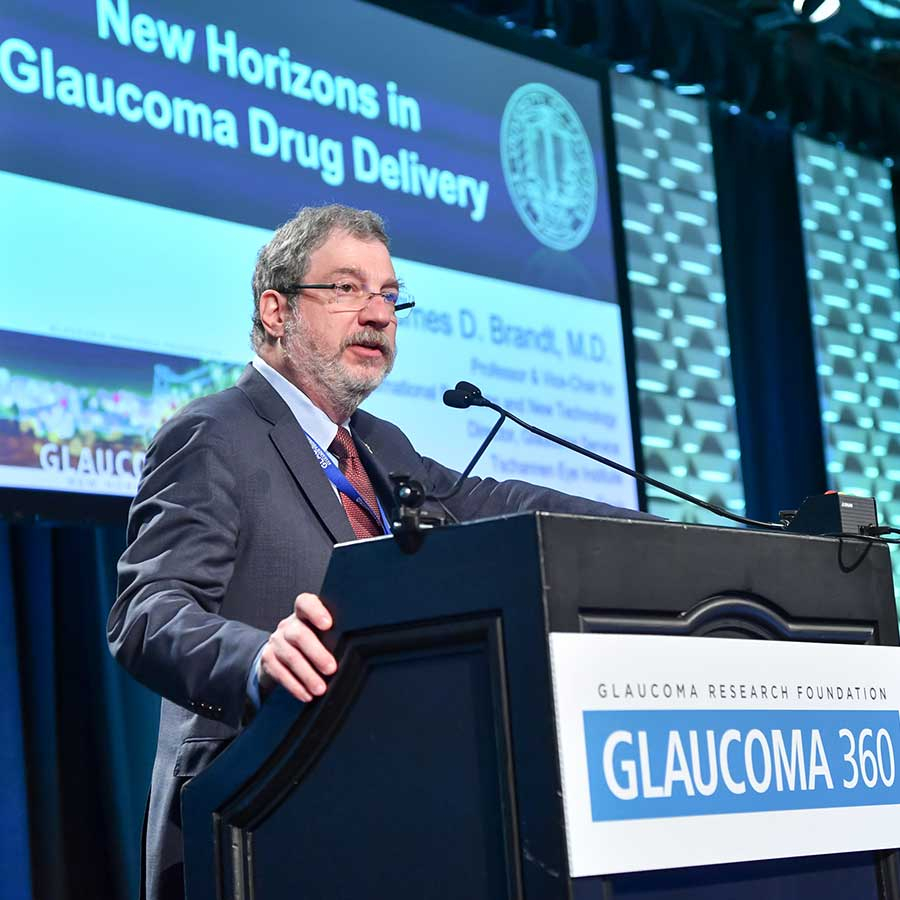 In this February 9, 2018 interview with Glaucoma Research Foundation, Dr. James Brandt (Director, Glaucoma Service, UC Davis) discusses the main takeaway messages from the session and his outlook on the future of drug delivery platforms for treating glaucoma.

Dr. James Brandt: I co-moderated, along with Anne Coleman from UCLA, a session on sustained release drug delivery systems for glaucoma. This is a field which most of us in the glaucoma field believe is going to be a major paradigm shift in the management of glaucoma in the coming decade or so. We all recognize that patients have difficulty, or simply won’t, take their glaucoma medications as prescribed. To the patients out there who are watching this video, believe me, the doctors understand that these medications are a pain in the you-know-what to take. They cause side effects, they are expensive, they’re inconvenient, and we hear you — we deal with this issue all the time. And yet, we don’t have any good solutions for our patients short of surgery to get glaucoma drops out of your lives.

There are many investigators that are working, and companies that are trying to develop ways to deliver a drug in a way that the patient doesn’t have to remember to take their 8 a.m. dose of something, and their 8 p.m. dose, or deal with taking two drops and making sure that you wait five or ten minutes between the drops so that they don’t dilute each other out. We understand that the way we deliver glaucoma drops is, to put it mildly, suboptimal. There’s a great deal of excitement of new approaches to delivering drugs in a way that he patient doesn’t have to be bothered with remembering something every three hours and so on.

In the session, we heard from a number of different companies and early stage laboratories from around the world who are developing ways to deliver drugs. These include things as minimally invasive as an eye drop that turns into a more or less solid gel that stays inside underneath the eyelid and delivers drug for a month or so at a time. In that ideal situation, you might take one drop every month. That’d be great. Other alternatives include various devices that sit on the outside of the eye that deliver drug but can be easily removed. They can sit in the lacrimal punctum, which is where your tear ducts drain. Many patients already have punctal plugs. This would be a punctal plug that would deliver a drug to the eye, potentially for a few months at a time.

And then as we get more into the invasive realm, we have devices and implants that might even be surgically implanted in the eye that would deliver drug continuously for up to six months or a year. There’s going to be, I think, a whole portfolio of different approaches that’s going to evolve over the next decade. As they get FDA approved, we’re going to learn how they are best used in the care of glaucoma patients.

There are several takeaways from the session. I started off the session by posing some concerns as it were. Understand me, I am very enthusiastic about this entire field, and I think if in 10 years drops are going to be the old-fashioned about of treating glaucoma, that we have a bunch of different ways so that the patients don’t have to remember 24/7 to take their drops, I think that will be a win, and I think we will get there in a decade or so.

But the challenge is that in a clinical trial, which is what these drug delivery systems are going to need to get approval from the Food and Drug Administration — that’s very different than the real world, and there are some real world issues that are going to have to be sorted out after these devices and platforms for delivering drug come to market. For example, if you implant something inside an eye and the patient has a side effect, you are obligated to go back to the operating room to remove something from the eye. That’s very different than in the current world where if a patient has a side-effect form an eye drop, and it’s clear that they’re having a side-effect from the eye drop, you say, “Stop taking the eye drop.” Very different, and we’re going to have to work out how that happens.

So, the thought that any of these single platforms for sustained release delivery of drug is going to be a magic bullet that will drop everybody’s pressure a magical amount and not need supplement with drops is not going to happen. We’re going to be in this situation after these devices, and platforms, and new drug formulations come out, we will be in that nether world where we’re going to have to figure out what portfolio and what balance of different platforms and different devices, and drops, are going to be needed for an individual patient. So, we’re in a transition phase, but I think within a decade of so it’ll be more clear to us what we need to be doing.

I feel the pain of glaucoma patients of having to have their medicines. It’s difficult living by a schedule of all these different medicines. I think just ease of mind for the patients is going to be a big win. Also, patients forget to take their drops, and then they are worried that the two days that they forgot to take their drops, damage may have occurred to their eye. That’s a valid concern. Sustained release delivery of drugs will eliminate some of that concern, and we hope that it will lead to better outcomes and fewer people going on to develop vision loss from glaucoma.

James D. Brandt, MD is a Professor of Ophthalmology and Vision Science and Director of the Glaucoma Service at the University of California, Davis.