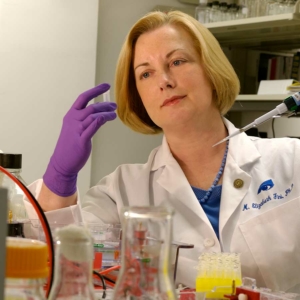 Dr. M. Elizabeth Fini, PhD is an accomplished researcher and director at the University of Southern California Institute for Genetic Medicine. Earlier this year, Dr. Fini and her colleagues published a paper assessing a link between a particular genetic predisposition, steroid use and the induction of glaucoma. Her lab’s research is currently focused on molecules that emerged during broad genomic and molecular screens that may have practical applications as therapeutics in the treatment of glaucoma, ocular hypertension and dry eye.

A Winding Path Through Research

Dr. Fini’s enthusiasm for science, specifically molecular biology, propelled her forward. “It was never a conscious decision to choose this direction. Everybody comes to what they are working on in different ways,” said Fini. She found the concept of how scientists can change cells, organisms and life on a molecular level, fascinating. After years of training in the necessary technologies, Fini accepted her first faculty position in Harvard Medical School’s Department of Ophthalmology and Dermatology, where she set about applying her molecular biological expertise to research the eye and its diseases.

Fini followed a winding road through her research, following the leads as they arose. One of those paths led her into the world of glaucoma. During a collaboration at Tufts University, she used her knowledge to assist in data interpretation. However, along the way she became excited about a new idea for what it all might mean. This led to an impactful paper describing a mechanism underlying all forms of high tension glaucoma. This work was a pivotal discovery both for glaucoma research and for Fini’s career.

Exploring the Molecular Mechanisms of Glaucoma

After the Human Genome Project was completed and published in 2003, sequencing technology and genomic information moved forward in leaps and bounds. The resultant DNA sequencing methods and innovative data analyzation software gave Fini new tools to continue her investigations into the molecular mechanisms of glaucoma. And after taking some time away from research to work in senior university administration, she returned to research ready to take advantage of the ways in which molecular biology had evolved. “The time seemed right to revisit my glaucoma research,” she said.

Fini had become interested in a special kind of glaucoma that was steroid-induced, and that certain people were more susceptible to it than others. “I’ve long felt that this was a special opportunity,” Fini said. “Why are certain people more sensitive? Addressing this gives us a whole new way to approach the problem of understanding the disease and how to treat it.” The underlying mechanisms responsible for this sensitivity could potentially help researchers focus their efforts and create effective therapies faster.

Continuing Research with the Shaffer Grant

Perhaps the most challenging part of scientific research is getting the funding to bring a study from initial phases to clinical trials and beyond. To get large-scale grants from the government, there needs to be research already in progress: ample preliminary data, a team of qualified techs and research associates, and a dedicated infrastructure proposal. “You need to give reviewers confidence you have something that will work,” said Fini. That’s where funding from Glaucoma Research Foundation comes into play.

In Fini’s case, the necessary seed funding came from GRF’s 1-year Shaffer Grant. This early funding helps with early publications and preliminary data to give large, competitive grant reviewers confidence in providing burgeoning scientists with larger amounts of funding. After the publication of her paper, Fini was notified that the National Institutes of Health (NIH) intends to award a five-year grant to her lab, which will supply her with the funds to continue her staff and carry her research forward as a larger study. The one striking issue here is that there must be initial research funding to get the ball rolling. Fini emphasized that these grants are absolutely necessary to get data to get larger grants. “Grants like the Shaffer are very important to junior investigators trying to get their new labs up and running. That is well-understood. But it is not broadly recognized that they are also needed to help mid-career or senior investigators make shifts in their research directions.”

Fini directly attributes her recent publication regarding the steroid glaucoma relationship and her ability to secure the NIH grant to the funds initially provided by GRF. And she says, “I think these foundations, like GRF and others that are specifically disease focused, make a huge effort to use money in the most impactful way. Every dollar makes an enormous difference.”