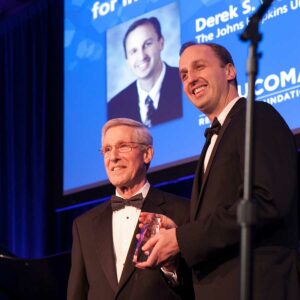 In ceremonies on February 6, 2014 at the historic Palace Hotel in San Francisco, Derek S. Welsbie, MD, PhD (the Johns Hopkins University School of Medicine, Baltimore, Maryland) was awarded the 2014 Shaffer Prize for Innovative Glaucoma Research for his study “Evaluating the Role of the c-Jun N-terminal Kinase Cascade in Retinal Ganglion Cell Death.”

Dr. Derek Welsbie received the award from Thomas M. Brunner, President and CEO of the Glaucoma Research Foundation, at the Glaucoma 360 Annual Gala — a benefit event to raise funds for glaucoma research and education.

The Shaffer Prize, presented annually by the Glaucoma Research Foundation, recognizes a researcher whose project best exemplifies the pursuit of innovative ideas in the quest to better understand glaucoma.

Dr. Welsbie was the recipient of a Frank Stein and Paul S. May Grant for Innovative Glaucoma Research. His research study identified a set of proteins that may play a central role in vision loss from glaucoma. The prize-winning project titled “Evaluating the Role of the c-Jun N-terminal Kinase Cascade in Retinal Ganglion Cell Death” was chosen by the Glaucoma Research Foundation’s Scientific Advisory Committee — an esteemed group of experts in the field of glaucoma.

Dr. Welsbie’s research results from the study were published in an article titled “Functional genomic screening identifies dual leucine zipper kinase as a key mediator of retinal ganglion cell death” in the March 5, 2013 edition of the peer-reviewed journal PNAS (Proceedings of the National Academy of Sciences).

Derek Welsbie is an assistant professor of ophthalmology in the glaucoma division at the Wilmer Eye Institute. He has an active medical and surgical practice, encompassing all aspects of glaucoma care. Dr. Welsbie earned his medical degree and his PhD in molecular biology from the University of California, Los Angeles. While there, he had extensive experience developing new drugs in the treatment of cancer and is translating that experience into ground-breaking laboratory efforts to identify new potential drug targets in glaucoma. Specifically, his interest is the use of high-throughput genetic screening (i.e. functional genomics) to identify the genes responsible for nerve cell death in glaucoma and other neurodegenerative disorders.