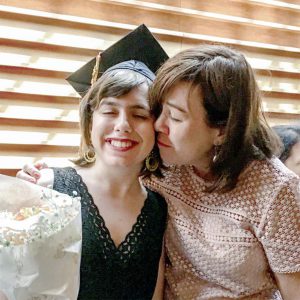 Sometimes when we’re faced with adversity and feel powerless to make a difference, the path forward lies in what we already know how to do. For Maureen Farrell, whose daughter, Fionna, was diagnosed with glaucoma when she was just 10, it is running marathons.

For years, Maureen made sure her daughter, Fionna, got the drops she needed to maintain her eye pressure, but by senior year in high school, that treatment stopped working and Fionna’s condition worsened threatening loss of sight. Fionna always is a straight A student, but in her senior year she was unable to take her AP English exam due to surgeries she would need.

The day after her 18th birthday, she had laser surgery that, unfortunately, was not successful. And prior to her senior prom, she had another one that failed, which left her looking, as her Philadelphia mother described it, “like she’d been in a Rocky fight.” For mother and daughter, it was a struggle to find positivism. Finally, after Fionna’s graduation in 2019, surgeons implanted a shunt, which seemed to work and kept her pressure stabilized. But as a mother secretly does, Maureen worried about the future. What if it doesn’t last?

“I wanted to do something,” Maureen said. “As a mother, I needed to do something. But what could I do? Then I realized, I’m a runner. I can deal with this through running. Like training for a marathon, dealing with glaucoma requires an incredible amount of diligence. You can never waiver from training or for Fionna, waiver from her medications and doctor visits.”

Maureen has run more than 15 marathons and 150 half-marathons, so it made perfect sense to enter the Philadelphia Marathon last fall to raise awareness about her daughter’s disease. And since Fionna’s doctor said Glaucoma Research Foundation was his favorite charity, Maureen donated all the proceeds to advance GRF research and education programs.

In the final tally, Maureen raised nearly $6,000 through friends and family for Glaucoma Research Foundation and continued her giving campaign after the marathon was over. This is a great example of how many small and special gifts can make a difference.

Fionna is smart and resilient. This past spring, she completed her first year at Oberlin College and Conservatory in Ohio, where she was a writer for the student newspaper, a radio station DJ, and a board member of a literary journal. All while maintaining a 3.9 GPA. And thankfully so far, her glaucoma is still stable.

“She’s going to have this disease for a long time,” Maureen said. “It’s going to be like a marathon.” But Fionna and her mother will never give up hope.

Maureen found a way to make a difference. Will you join the race for a cure and make your gift today?