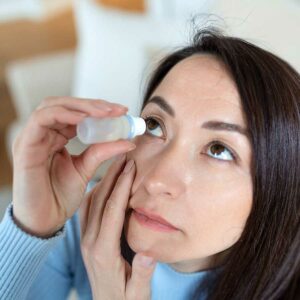 Many people think that glaucoma treatment begins with drug therapy and progresses to surgery. Sometimes that is right, but not always. While it is true that medication is often the first treatment option—especially when the disease is caught early enough—surgery, implanted devices, and glaucoma medication often go hand in hand. The goal, of course, is to find the most efficacious treatment regimen for each patient, and oftentimes that means combining treatments.

Glaucoma drugs work by either decreasing the amount of fluid produced (beta-blockers, carbonic-anhydrase inhibitors, alpha-adrenergic agonists), or increasing the rate of drainage (miotics, epinephrines, and Prostaglandin analogs).1 For many patients these work well, but when an individual drug fails to get the desired result, drug therapies are often combined.

There are two types of drug combination therapies, free-combination therapy and fixed-combination. The difference is that in the first, the dosage of each drug can be altered; and in the second, when one dosage is changed, they all have to be changed.2 So, if a miotic drug like Pilopine® doesn’t increase the drainage rate to adequately lower the pressure, the doctor might add a beta-blocker like Ocupress® to decrease the amount of fluid produced. Single or combination drug therapy might be all it takes to regulate eye pressure, but many times patients need more direct intervention in addition to continuing their medication.

Laser Treatment. This procedure, which opens the trabecular meshwork, can be performed in the doctor’s office, and is generally well tolerated and painless. For patients with closed-angle glaucoma, the doctor performs a procedure called an iridotomy, in which a laser is used to create a tiny hole in the iris to help fluid flow to the drainage angle. Depending on the level of pressure reduction achieved by the laser procedure, medication may be continued.

Traditional Surgery. There are some cases where traditional surgery is needed to create new drainage channels for the fluid to leave the eye. When performing a trabeculectomy, the eye surgeon creates a tiny flap in the sclera as well as a kind of pocket in the conjunctiva called a filtration bleb, which is typically hidden under the upper eyelid. Fluid is then able to drain through the flap and into the bleb, where it is absorbed by the surrounding tissue.

Implants. These fall into two main categories: drainage devices and pumps. Drainage devices are tiny drainage tubes have been around for a long time. They work by releasing fluid into a reservoir created beneath the eyelid where it is absorbed into the surrounding tissue. Meanwhile, researchers have developed a medication pump that can be implanted directly into the eye. Medication is injected into a reservoir through a port and the dosage and frequency are controlled by a wireless device. The study results were good enough to warrant further improvements in the device and further study.

Implants like this are an example of a way doctors combine drugs and devices in order to best meet the needs of their individual patients. Meanwhile, techniques and technology are constantly improving, offering glaucoma specialists an ever widening range of possibilities when looking for treatment options.