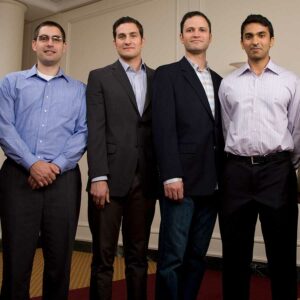 The Catalyst for a Cure Biomarker Initiative (CFC2) — This unique research model brings together four laboratories, each with a specific skill, to work together to discover new biomarkers. Sensitive biomarkers will help doctors diagnose glaucoma earlier and treat it more effectively.

Focus on the Retina

Their focus is the retina, the thin tissue in the back of the eye containing the photoreceptors and nerve cells. These nerve cells, known as retinal ganglion cells (RGCs), use electrical impulses to send visual information — entering the eye through the optic nerve — to the brain where images are perceived.

The health and evaluation of the RGCs are fundamental to glaucoma because as these cells degenerate and die, vision is lost. Through their investigations, the CFC researchers have been able to identify which types of RGCs are injured or die first in glaucoma. Measuring these critical cell changes is fundamental to this project and to accomplish this, the team is developing state-of-the-art imaging equipment to non-invasively measure the structural and biological changes in the nerve cells of the eye due to glaucoma.

At the 2016 annual meeting with the investigators and their scientific advisors, the CFC team reported that they are concentrating on three of the most promising new measures for glaucoma and hope to have them available for clinical evaluation later this year.

New Glaucoma Biomarkers to Be Tested

The first biomarker is mitochondrial structure and metabolism. Mitochondria produce energy for the cell and if they are damaged or not working correctly, it can result in the damage and eventual death of RGCs leading to blindness. By observing and measuring changes to the mitochondria, it may be possible to intervene to ensure the health of the RGC, before vision is lost.

The third promising biomarker involves imaging of the inner retina, including vascular, nerve fiber and ganglion cell components. Being able to view very early changes could allow doctors to intervene before the nerve cells are damaged.

Watch this video update from the CFC2 research team:

Read more about the Catalyst for a Cure.