Catalyst for a Cure 2011 Progress Report 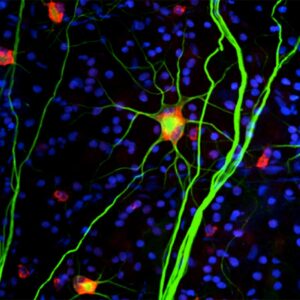 During this past year the investigators of the Catalyst for a Cure (CFC) consortium have continued to probe how and why retinal ganglion cells degenerate in glaucoma. Notably they have investigated how diverse cellular players and molecular pathways contribute to disease onset and progression. Their work will ultimately help define new diagnostic strategies or treatments for glaucoma.

The CFC has delved into the nature of degenerative changes in retinal ganglion cells. They have observed loss of connectivity of these critical neurons in glaucoma, both at the level of inputs with the retina and their outputs to the brain.

These degenerative changes compromise the neuron’s ability to process and transmit visual information well before the neurons actually die. What is becoming clear is that retinal ganglion cells and their axons are challenged very early through factors that the CFC is working to understand.

In addition to these neuronal changes, the CFC researchers are investigating the role of non-neural cells known as glia.

These results demonstrate that glia may be detrimental during the initial course of glaucoma, and suggest that dampening the responses of glia may of therapeutic value.

Finally, the CFC has discovered a unique population of glia in proximity to retinal ganglion cell axons as they exit the retina. Surprisingly, these glia were found to engulf and degrade materials from intact axons.

The CFC proposes that this newly identified degradation pathway may significantly contribute to the axon loss that defines glaucoma. Together these studies show that the responses of both retinal ganglion cells and surrounding glia are involved in the pathogenesis of glaucoma.

Studies Reveal the Complex Nature of the Glaucoma

The past year has been a productive one for the CFC labs, resulting in 11 publications including papers in the Journal for Neuroscience and the Proceedings of the National Academy of Sciences.

In addition, the CFC made multiple presentations at international meetings, such as the annual meetings of the Society for Neuroscience and the Association for Research in Vision and Ophthalmology.

Together, the studies of the CFC are revealing the complex nature of glaucoma, and how multiple interacting factors ultimately contribute to vision loss in this disease.

This 2011 progress report is from the Catalyst For a Cure (CFC1) principal investigators: