No one can predict the next big breakthrough in glaucoma treatment, but one thing is certain: A whole lot of experts are searching for ways to make the future better. 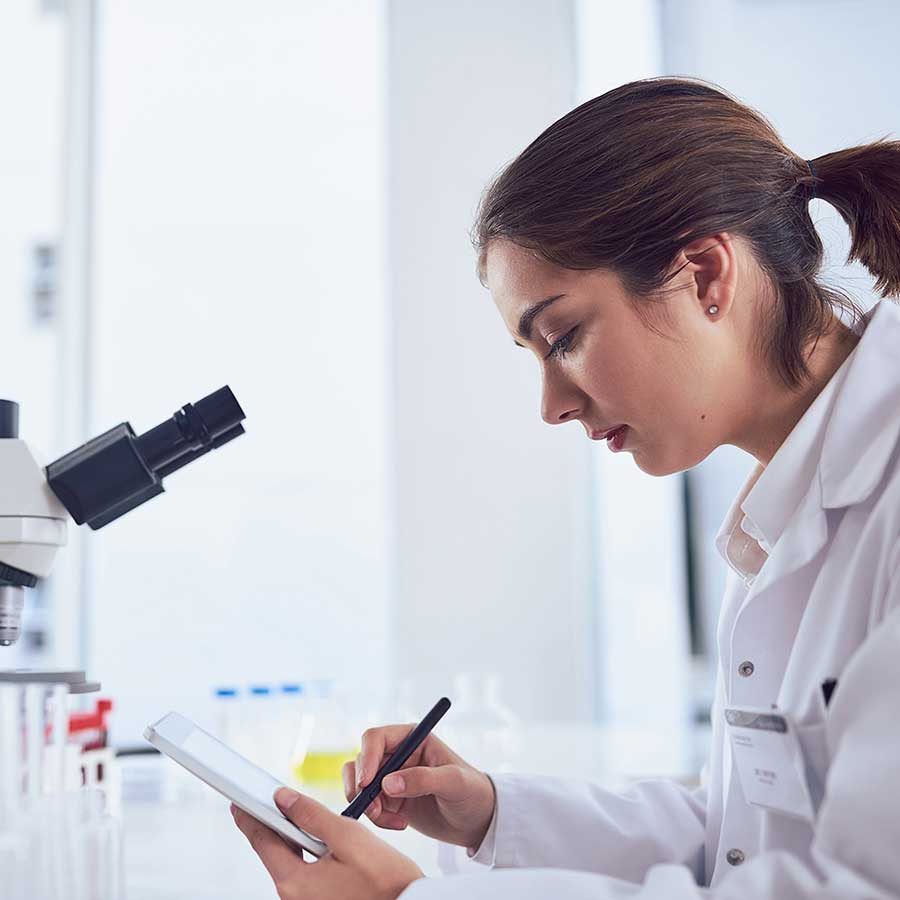 No one can predict the next big breakthrough in glaucoma treatment, but one thing is certain: A whole lot of experts are searching for ways to make the future better.

The more you know about how medications are developed and the innovative treatments that are in the works, the easier it is to feel invested in the work and passion of people dedicating their lives and resources to finding a cure.

Here is an overview of the reality, risks, and role of glaucoma research.

First-line treatment for glaucoma consists of eye drops to lower intraocular pressure. Medications relieve pressure by reducing the amount of internal eye fluid, but they do it in different ways. Some enhance the natural fluid drainage system within the eye, others cut down on the amount of fluid produced, and a few do both. That makes choosing a medication sound simple, but each medication has a distinctive biochemical impact, which can make things tricky.

After choosing a drug class, eye doctors must then decide which of the multiple medications in that class might be best for the patient, as each medication uses a different molecular pathway. For example, all beta blockers “block” specific biochemicals, but some work throughout the body and others target specific parts of the body. It is up to the doctor to decide which would be more conducive to a particular patient’s therapy.

Glaucoma patients may need to try several types of eye drops before finding the one that works. That’s also why medical experts never stop searching for new medications. There’s always another biochemical path to target that may do a better job of lowering eye pressure, which is why there is always talk of new drugs “in the pipeline.”

So What Is This “Pipeline”?

It all begins in discovery and development, where researchers explore biochemical interactions in the eye and try to find new compounds that will impact a precise molecular mechanism. There’s no timeline for this part of the process, as it can take many years of slow, tedious and expensive research.

Once a new medication is developed or a new use is found for an old medication, researchers have to test it in the lab to determine whether it’s safe and effective, and to figure out the appropriate dose. If they successfully pass this roster of rigorous tests, they get to apply to the U.S. Food and Drug Administration (FDA) for approval to conduct clinical trials.

Once FDA approved, our potential new medication must pass through three clinical phases before it can be released and used in patients. For Phase I, researchers must recruit 20 to 100 human participants, who agree to take the medication for several months to verify safety and dosage. About 70% of drugs that enter Phase 1 will be successful enough to proceed to the next phase.

Phase 2 requires several hundred people participating for a period of anywhere from several months to two years. During this phase, researchers watch for effectiveness and side effects. Only one third of the medications that enter Phase 2 move on to Phase 3.

In Phase 3, researchers recruit 300 to 3,000 volunteers to participate in the clinical trial for one to four years. During that time they continue to track effectiveness and monitor for adverse reactions. Only about one fourth of drugs tested in Phase 3 are successfully verified.

These 25-30% will move on to the next phase, where they’re approved for the market by the FDA and go on sale for consumers. As patients begin to use the medication, researchers continue to monitor long-term effectiveness and how the drug impacts the patient’s quality of life.

It may take a long time for new treatments to become available to patients, but there are always many potential medications “in the pipeline” at every stage of the process. Here’s a peek at the next generation of glaucoma treatments in the last stages of development:

About 12 compounds are being tested that target the eye’s main drainage system, the trabecular meshwork. One of the most promising, a class called Rho-kinase inhibitors (also known as ROCK inhibitors), will boost fluid drainage by changing the underlying structure of the trabecular meshwork, which is similar to skeletal muscles but on a cellular level. Several ROCK inhibitors are already in Phase 2 and Phase 3 clinical trials. Meanwhile, a new drug called Rhopressa, a combination rho kinase/norepinephrine transporter inhibitor, successfully made it through Phase 3 clinical trials in January 2017, the first new class of IOP-lowering agents to become available in over 20 years.

Of course, the battle against glaucoma is ongoing. Researchers are also currently investigating therapies to protect the optic nerve from damage using neuroprotective drugs, including glutamate receptor blockers, calcium channel blockers, nitric oxide synthase inhibitors and treatments that increase blood flow to the optic nerve. Researchers funded by Glaucoma Research Foundation have been hard at work developing neurotrophic factors, which naturally promote nerve growth in your body, and are now testing their effectiveness.

As exciting as these new potential treatments are, it is important to remember that even after years in discovery and development, it can take another seven to ten years for new pharmaceuticals to get through clinical trials.

Catalyst for a Cure Scientists Show Progress and Collaboration

Innovative Research Leading to a Cure