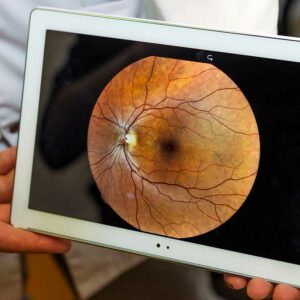 Imaging technology to diagnose glaucoma has grown by leaps and bounds in the last decade, which means that there may finally be another way to get an ophthalmoscopy without having to deal with long doctor’s visits and irritating dilating eyedrops. Not only will this new technology make the process faster and easier, it will also help people who might not have easy access to an eye doctor due to physical, geographic, or financial constraints.

The fundus of the eye—the interior surface of the eye opposite the lens—includes the retina, optic disc, macula, fovea and posterior pole. This area is of particular interest in diagnosing and assessing the progression of glaucoma and other degenerative eye diseases. The dilated exam has been the gold standard because it is incredibly thorough. Some estimate that the sensitivity of a dilated funduscopic exam may be twice as high one conducted through undilated pupils. What follows is generally a physical examination performed by the eye doctor, a comprehensive array of digital photos taken of the fundus, or a combination of the two. This generally gives the doctor a very clear idea of what is happening in your eye and provides an important record for tracking the progression of many degenerative eye diseases.

However, this process can be uncomfortable or inconvenient for the patient (and for a very small minority [roughly 1-6 in 20,000] it may precipitate acute angle closure glaucoma). The equipment necessary to take these photos is cumbersome and extremely expensive, even in North America where it is more readily available. In countries that aren’t as wealthy, or have governments that don’t subsidize ophthalmology, the procedure can be a major prohibitive expense.

The Future of Fundus Cameras Is Affordable and Portable

Over the last decade, researchers have been assessing the capacity for point-and-shoot digital cameras to be modified to be used for retinal diagnostic imaging. This concept was originally developed as a way to make screening programs for diabetic retinopathy and age-related macular degeneration more accessible to less mobile or entirely homebound senior citizens. Since most ophthalmoscopic cameras cannot be hefted to and from senior centers or patients’ homes, having less expensive, travel-sized equipment would drastically increase standard of care.

Today, the feasibility of this technology has drastically increased, and doctors are hoping to begin utilizing these affordable and portable cameras to adapt the way they monitor and diagnose glaucoma. A recent innovative fundus camera based on the Raspberry Pi 2 Model B and the NoIR camera board is as portable as your average Nikon, boasts superb image quality without need for dilating eye drops, and only costs about $185. The researchers say this technology will open diagnostic doors for glaucoma patients worldwide. Eventually, patients may even be able to take these photos themselves, and simply email the pictures to their doctor.