Andrew Huberman, PhD is a principal investigator in the Catalyst for a Cure Biomarkers Team funded by Glaucoma Research Foundation in San Francisco, CA. 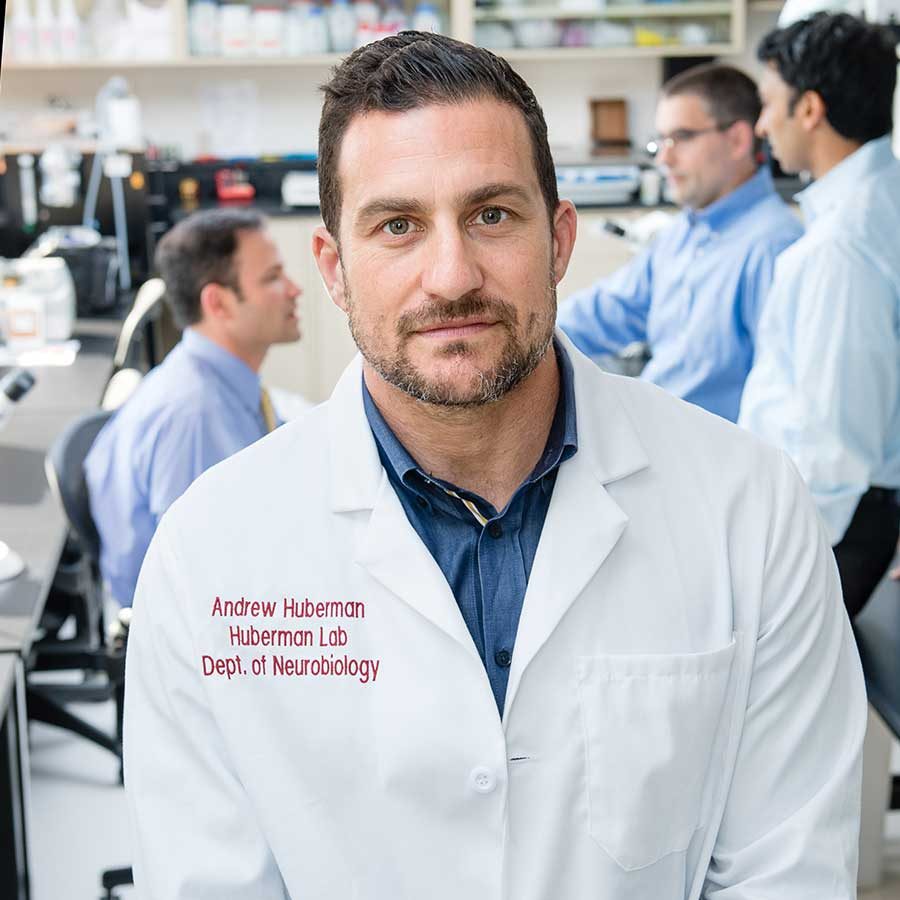 Andrew Huberman, PhD is a principal investigator in the Catalyst for a Cure Biomarkers Team funded by Glaucoma Research Foundation in San Francisco, CA.

Catalyst for a Cure brings together scientists from different backgrounds to work collaboratively to better understand glaucoma and find ways to improve treatment and ultimately cure this blinding disease.

Watch these videos for a research update from the Huberman Laboratory at Stanford University School of Medicine. The goal of the Huberman Lab is to understand how the retinal and brain circuits that underlie vision wire up during development and to develop new strategies to monitor, prevent, and treat retinal ganglion cell loss in glaucoma.

Dr. Huberman: Being part of the ‘Catalyst for a Cure’ (CFC) team has impacted me in a huge number of ways. As a scientist, it’s allowed my lab to shift our focus from visual system development and function to also studying visual system disease. In doing that, I’ve had the opportunity to interact with many people in the glaucoma field, so to speak.

This is everything from ophthalmologists who are acting in a clinical role to the general public that are concerned or interested in the topic of glaucoma to glaucoma patients that have varying levels of vision loss. Personally, those kinds of interactions have impacted me by giving me a great sensitivity to the degree to which we are dependent on vision in order to navigate our daily lives, but also it’s giving me a tremendous amount of purpose and meaning in my work.

I used to come to my lab with the intention of doing the best science that we could in order to publish papers and get grants and so forth to eventually impact human disease in some way, although that direct link to human disease wasn’t obvious. The goals became to be able to tell people that we were actively working on something that might help them maintain or even retrieve their vision in cases like vision loss due to glaucoma.

That’s become the reality. We now have clinical trials as a result of work done in my laboratory and with the other members of the CFC. Some of those clinical trials are getting initiated in early 2018. This has given me a tremendous emotional lift. I would say it’s gratifying. We still need the results, but it’s been a tremendous ride and I’m looking forward to more.

Retinal ganglion cells are the neurons that link the eye to the brain. The eye’s job is to take light in the form of light energy or photons, and convert it into electrical signals and chemical signals that the rest of the nervous system and brain can understand.

The retinal ganglion cells’ job is to take those electrical signals and send them into the brain. The way they do that is by little wires that we call axons that actually exit the back of the eye in the area we call the optic nerve head. They comprise the optic nerve, and they’re literally like wires that plug the retina, the light-sensing neural tissue at the back of the eye, to the brain.

Then the brain makes sense of those neural signals so that it can understand, or you can understand, what an edge is or what a person’s face is and who that person is. They’re really remarkable cells in that sense. All of our vision is dependent on the electrical activity of retinal ganglion cells, really incredible cells.

You can think about the treatment of a blinding disease like glaucoma as requiring a couple different things. One, if you have healthy retinal ganglion cells, we want to know how to keep those ganglion cells around in order to maintain what visual capacity they carry.

The other approach is for ganglion cells that are sick, that are kind of teetering on the edge to varying extents: you want to shift them back towards a healthy state. Then finally, for cells that are really sick, you want to be able to rescue those cells, to resurrect them from almost dead to alive and healthy.

The video interview with Dr. Andrew Huberman continues below.

Dr. Huberman: CFC2 [the Catalyst for a Cure Biomarkers Initiative] has been tremendously productive in finding and identifying new biomarkers for glaucoma. These range from visual stimulation experiments that allow us to tap into the specific sets of retinal ganglion cells that are most vulnerable early in the disease, to the evolution of new imaging techniques, largely thanks to Alf Dubra and Vivek Srinivasan’s work in those areas, and the ability to image retinal ganglion cells and their component parts like their axons which degenerate very early in glaucoma. Being able to image them in the human eye at high enough resolution to use the presence of those markers — in this case the presence of axons and some of the shipment of different protein cargo and other things that are important for the ganglion cell health — to monitor those as a way to understand whether or not ganglion cells are healthy or not or getting sicker or not. That’s been a tremendous advance.

Then we’ve also started to move into clinical trials. We’ve made great progress in the virtual-reality stimulation of ganglion cells area. We built a virtual reality environment in which patients can put on the headset and forage through environments that are fairly pleasant, which we think will make them actually want to do the stimulation, which is important.

This is an art gallery of sorts in which the patient forages to look at different paintings and at each painting is receiving stimulation in the form of little bubbles — it looks like little bubbles. Eventually the paintings emerge, but the little bubbles, as we call them, are stimulating specific types of retinal ganglion cells in very specific ways, which is necessary, we know from other studies, to encourage their ongoing health by transmitting electrical signals down their axons to the brain.

We’re excited to then implement the imaging tools that Alf [Dubra] and Vivek [Srinivasan] have developed in order to assay to what extent this visual stimulation in virtual reality is helping improve the structural biomarkers of retinal ganglion cell health that are measured by imaging. By the end of 2018, we intend to have the results of these studies, and we are tremendously excited. I get email after email after email from people that are interested in being subjects, so subject recruitment is not going to be an issue.

We don’t know what the outcome is going to be, of course. We don’t get to decide that, but we are certain that we’re already learning and are going to continue to learn some extremely valuable information for the diagnosis, treatment and perhaps even reversal of glaucoma symptoms.

Without the CFC collaboration, my lab couldn’t have worked on glaucoma. We could have sought federal funding to do that. It wasn’t a total impossibility, but in this current funding climate, in order to get federal funding you already have to essentially have a good deal of the data. It’s very hard to transition into new areas if you don’t already have expertise in those areas.

The CFC [Catalyst for a Cure] funding made it possible for me to transition half my laboratory into the study of glaucoma and neural repair and ganglion cell repair and regeneration. It’s allowed me to interface with clinicians and people in the state-of-the-art imaging world that, sure, I could have met at meetings, but I don’t think I could have aligned forces with as readily as we have with CFC.

It’s allowed us to move from animal studies to clinical trials within less than a year of the publication of the animal study, which, as far as I know, is unprecedented and extremely exciting. We can honestly say that we’re moving straight from the lab bench to the clinic. We’re doing this in a very dedicated and, of course, careful way. Safety is always going to be put first.

This sort of thing — of aligning four labs along a common theme, a common goal, bringing in multiple techniques, multiple lines of expertise and really making what I think are significant strides towards an important biological and clinical problem ¬— that could have only happened with this kind of CFC initiative. It’s been wonderful to be a part of.

We’re absolutely closer to a cure than we were five years ago. We understand far more about the biology of retinal ganglion cells and glaucoma — which ganglion cells degenerate early. We can use that, and are using that, as an inroad into understanding the molecular basis of that vulnerability because ultimately glaucoma is a vulnerability to pressure, and not necessarily due to pressure level per se. That’s important.

We’ve clearly made great advances in terms of being able to monitor the health of retinal ganglion cells in the intact human eye. That’s extremely important because any treatment that’s going to come along has to be measured. How well something is working to improve conditions in glaucoma has to be assayed in a way that’s very sensitive. The imaging tools have done that.

Then of course we don’t know the outcome of the virtual reality stimulation studies yet, but we like to think that the study that we’re now conducting and studies like it from people outside the CFC are raising the conversation and are raising the importance of neural activity in retinal ganglion cells as a way to both keep ganglion cells alive and perhaps even to bring back some that are really on the brink of dying.

We don’t have a ‘bottled cure’ at the moment, but I’m confident that within the next five years we’re going to have significantly improved treatments for glaucoma.