Chris Wilmoth and the Power of Family in Fighting Glaucoma

"Glaucoma Research Foundation is the best out there. They are ahead of the curve—they’re looking forward for the cure." — Cathy Wilmoth 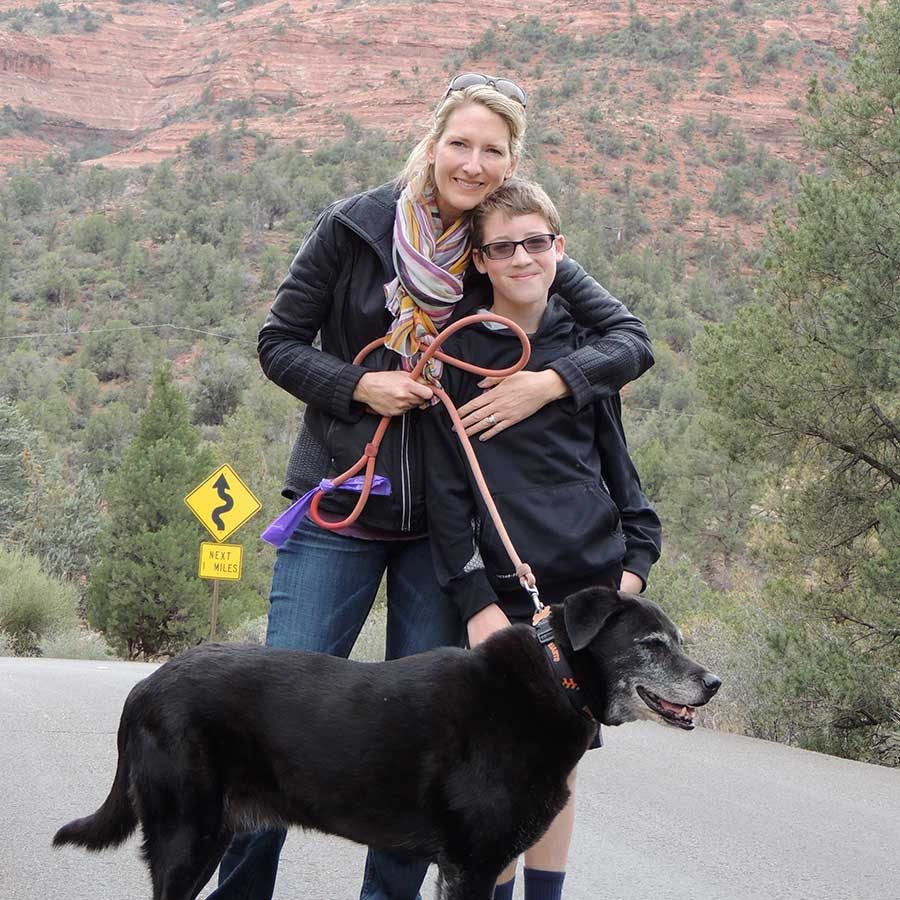 Chris Wilmoth and the Power of Family in Fighting Glaucoma

"Glaucoma Research Foundation is the best out there. They are ahead of the curve—they’re looking forward for the cure." — Cathy Wilmoth

Over the last summer, while getting ready to start 8th grade—that last year before high school comes rushing in—Chris Wilmoth was hurt playing basketball with his CYO team. A twisted ankle led to a bad fall which caused a broken arm. This was a painful accident, and one that’s pretty rare for basketball, but it’s also the kind of injury that kids tend to suffer: bad luck during athletics. The fact that it is so normal is what makes it extraordinary: Chris, who is 13, has had glaucoma essentially his entire life. Despite this, he’s able to do everything else kids his age can do—including get hurt playing ball.

That Chris is out there playing hoops in the first place is remarkable, and it is due to several factors: the strength of his family, his own personal courage and clear-mindedness, and the help and research of groups like Glaucoma Research Foundation. Since Chris’s diagnosis when he was a baby, the family rallied around the cause, raising money, spreading awareness, and working with the community to help combat glaucoma, both for people like Chris and for the future. In doing so, they showed the importance of coming together, and how there is no diagnosis that can’t be overcome with strength, love, and optimism.

When Chris was just seven months old, his doctors diagnosed him with glaucoma. This is rare, but sadly far from unheard of: approximately 1 out of every 8,000 infants suffers from childhood glaucoma. That’s around 400-450 babies in America every year. Its relative commonness doesn’t mean that there aren’t moments of fear and doubt and uncertainty, of course. For Cathy and Charlie, his mom and dad, these fears were assuaged by information, and by learning everything they could. This learning was made possible by GRF.

The Wilmoths, who live outside of San Francisco in Mill Valley, were quickly introduced to Dr. Andrew Iwach, the Executive Director of the Glaucoma Center of San Francisco, and a board member for Glaucoma Research Foundation. As Cathy put it in an interview, this “amazing guy” quickly helped them realize that things were going to be okay. And he was just the tip of the iceberg. She was impressed by the “caliber not only of the doctors, but of the global mission” pursued by GRF.

One thing that struck Cathy about Glaucoma Research Foundation was the diversity of experience and expertise they brought to bear when it came to fighting glaucoma. “There are fascinating doctors from different locations and specialties—it’s such a revolutionary way of attacking glaucoma. They are looking at it from all different angles to find the cure.”

This was inspiring, and immediately comforting. Chris’s diagnosis went from being a tragedy to a problem they could manage. And managing it started with the family.

Giving Up Gifts To Help Others

If you were to make a list of things that you didn’t want to do, suggesting to two children under 10 that they forsake presents to help their baby brother would probably be pretty high up there. But that’s exactly what Charlie and Cathy did with their daughters Cate and Tess. When Chris was diagnosed, Cathy explains, “the kids just jumped on” the idea of giving up presents to help their brother, and other kids like him, without hesitating. From then on, for birthdays, instead of presents Cate and Tess asked for donations to Glaucoma Research Foundation, which were then matched by their parents. Imagine happily giving up opening presents from your peers so that you could help your baby brother, as well as countless strangers. It is a selflessness and goodness that can’t be faked. (And, as Cathy said, not adding to the three-child toy clutter was pretty nice as well).

The family didn’t stop there, though. When Chris was a toddler, they started hosting fundraisers in Marin, having a speaker come for a cocktail hour, raising both awareness and money. For Cathy, this kind of community involvement was even more important than whatever funds they were able to raise. Glaucoma is a hidden disease, and many people don’t realize the rate of childhood incidence. Letting people know that this can happen to anyone helps advance research and awareness down the road. That’s how it spreads: like a ripple in a stilled stream.

The family is still involved with GRF. Charlie now serves on the board, and they attend the yearly gala, which is one of the most important events of the fundraising cycle. It’s a family that sticks together, fights together, and works together. That, for Cathy, was the most important thing, and it was helped by her amazing children. The diagnosis, as she said, “wasn’t just about Chris, but about the whole family,” and what they could do. Their eldest, Cate, was all in, and her enthusiasm helped make supporting GRF a family tradition. They’ve kept moving forward since then, an attitude that keeps them strong as they grow older. They’re already looking forward to what comes next.

Chris and the Wilmoths, Moving Forward

Entering 8th grade already has Cathy thinking of high school, and of course college. That means that “it’s getting to the point that all the responsibility will be in his hands, so he’ll need to make sure medication, appointments, and everything else are consistent.” This is a big deal, but gaining more responsibilities is part and parcel of growing up. It’s just that for Chris, his responsibilities include glaucoma, and that’s something he has managed his whole life. As he said, “It’s become habit. It doesn’t really affect me.”

This kind of management and understanding is what Chris would recommend to any other young person diagnosed with glaucoma. He manages his eyedrops and medications, and life is normal. He wants people to know that a full and happy and ‘normal’ life is not only possible, but extremely attainable. “It’s important that when it gets hard, just push through it and think about tomorrow. Look forward to having a fun life.” It’s an attitude that all of us could use.

It’s one Cathy agrees with as well, and one she repeats for parents facing the same problem. Having a close friend who’s had a child diagnosed with cancer, Cathy knows the difference between something you can manage and something else. She urges parents to get all the information they can, from the internet, from books, and most importantly, through dedicated and reputable sources like GRF. The Wilmoths are “very optimistic people,” and believe strongly in the power of knowledge. “There’s so much information out there—just get in touch with the right people!” she urges other parents.

“You have to do what you need. Tons of research and support systems are out there for blind children—even just sight impaired kids. Find it. Any problem we hit as a family, it’s always research, research, research. And there’s always a bright side. The information quells your fears.”

The family plans to continue their role as activists, and to help make sure that Chris continues to be a normal teen, broken arm and all. And that’s the point of GRF: making sure that people can live normal lives as we move toward one day curing glaucoma altogether. Cathy sums up the heart of GRF perfectly. “Their website has a lot of info. Like anything, if you’ve got a disease, you’ve got to tap into the community that knows the most. GRF is the best out there. They are ahead of the curve—they’re looking forward for the cure.”

There are thousands of kids like Chris, and thousands of families like the Wilmoths, and together, we can help them. Your donation to Glaucoma Research Foundation helps people with glaucoma find support and manage their disease to prevent vision loss, as we constantly work toward a cure. Find out the ways you can get involved and donate today.

Dr. Andrew Huberman: What Motivates Me as a Scientist